The Role Of HR In the Gender Pay Gap

The gender pay gap and the differences between how men and women are treated in the workplace is an important issue in any HR role. It raises a plethora of questions concerning equality, diversity and workplace culture.

As an HR professional or business owner, it is important to be aware of issues like gender bias and the preconceptions so many of us have about men and women.

Addressing this can enable your business to grow, not to mention positively impacting your whole workforce and ensuring each of your employees reach their full potential.

If you are looking for ways to tackle the gender pay gap issue within your organisation, please keep reading.

What Is the Gender Pay Gap?

Despite the UK being one of the more economically developed countries where women have equal rights, compared to other parts of the world, there is still a large difference in pay when comparing the two genders. 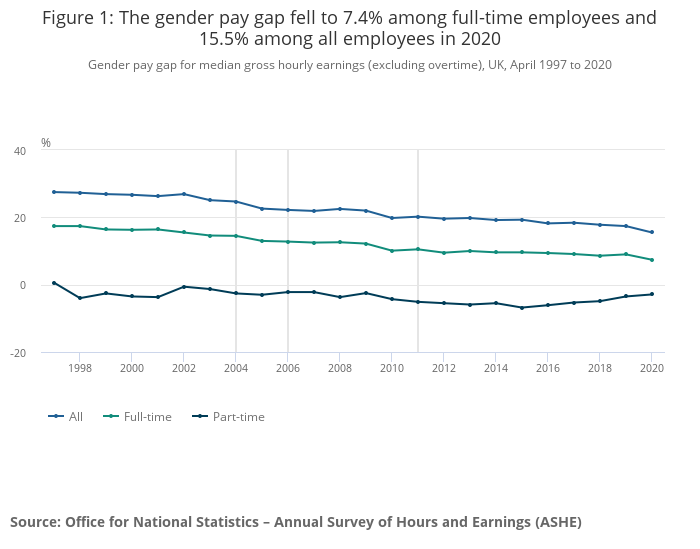 The chart (above) published by the Office for National Statistics shows the difference in earnings between men and women, comparing full-time and part-time employees. The pay gap has steadily declined since the 1990s, but it is still present.

Although the difference in salaries between males and females has slowly declined, gender pay gap statistics show it is still present in our society.

For full-time employees in the UK, the median gender pay gap was 15.5% among all employees in April 2020, which is still a considerable amount considering the gender pay gap for full-time employees is close to zero for workers between the ages of 18 and 39 years. We also know that education and job opportunities appear to be the same for men and women, according to the same study carried out by the Office for National Statistics, and yet women above the age of 40 are far more likely to work in lower-paid occupations and experience the full effect of the gender pay gap.

What Are the Reasons Behind the Gender Pay Gap?

Over the years, there have been a lot of discussions surrounding gender pay gaps, with more of us now asking the important question – why is there a gender pay gap?

To start to answer this question as it relates to your organisation, we must first look at the data.

While every organisation is different, in my experience there are typically three key levers that drive the gap between the pay of men and women.

Add to these, the fact that women over the age of 40 are more likely to work in lower-paid occupations, compared with those under 40, where representation is much more evenly balanced across all roles.

There is evidence that it’s also about how much men are paid vs women for the same role – or role of equal value – but this is an equal pay issue rather than gender pay gap. However, there is no denying that both these issues are interlinked and must be tackled.

Let’s look at some of the possible drivers of the gap in more detail. Remember, these may not all apply to your organisation, and it’s important to understand your data first, before making assumptions and what you need to tackle.

In spite of decades of effort, many industries are still highly segregated in the UK. Some jobs are still considered “women’s work,” and others are male dominated. Historically, the “women’s” roles have tended to be valued differently than those for men. More than 60% of the lowest paying jobs are held by women, and in the STEM industries (science, technology, engineering and maths), only 25% of the roles are filled by women.

While it’s not always the case, it’s more common for women to experience career interruptions or have to opt for part-time jobs to care for children. The cost of childcare can present a barrier for parents wanting to remain at work, both for men and women.

Entrenched societal norms and stereotypes mean that unconsciously biased labels endure – women as ‘the carer’, and men as ‘the breadwinner’. Where flexible work arrangements are available, or even encouraged in more progressive organisations, they are often targeted at the female employees, leaving men feeling less able or supported than women to ask for flexible arrangements.

Imbalance of Domestic Responsibilities, Regardless of Employment Status

Perhaps driven by this unconscious bias, women also typically take a disproportionate share of unpaid care and domestic work, even when they are full-time. The pandemic has provided some further insights into this imbalance of domestic arrangements, and it is likely we will see a continued, or worsened, a material effect on the balance of women in the workforce.

When we look at senior leadership roles, we can see that they are male-dominated almost across the board. As of September 2020, there were only five FTSE 100 companies with a female CEO.  While the balance in the Board as a whole appears to be shifting in the right direction, there is still long way to go, and it’s important to read the statistics carefully, and in particular to distinguish between the balance of Executive and Non-Executive (NED) representation (there has been a recent increase in female NEDs).

Statistics show that men (83.1%) are more likely to negotiate their salary than women (73.1%), while women are less concerned about job titles and 29.5% of men would argue that their job title is a critical deciding factor in accepting a job offer, compared to 22.9% of women, according to CV-Library.

When we learn that 73% of part-time workers are female and 41% of women work part-time compared to only 12% of men, another explanation for the gender gap emerges.

Why Is Reporting on the Gender Pay Gap Important?

As of April 2018, most UK companies with 250 or more employees have been required to publish data relating to their gender pay gaps in compliance with the Equality Act 2010 (Gender Pay Gap Information) Regulations 2017.

As HR professionals, these gender pay gap regulations provide the discipline and framework for  us to uncover whether there is a pay gap. While the figures don’t explain the reasons, the eport can provide the prompt to further investigate the root causes, to then enable companies to develop ways in which we can close the gap.

Actively sharing this information and discussing this with the company, as a whole, promotes equality and diversity, not to mention showing employees that their opinions are valued.

Having a gender pay gap doesn’t necessarily mean that unlawful discrimination is taking place in an organisation, and may simply mean that women feel less encouraged to apply for more senior roles. Publishing and monitoring information relating to pay gaps helps employers to understand the contributing factors for any gap and consider how this is best tackled.

Diversity, inclusion and talent are very much a growing focus for organisations and recognising if there are gender pay gaps can make it easier for employers to monitor their effectiveness in how to close the gender pay gap.

How HR Can Enact Change

The gender pay gap isn’t just a women’s issue; it’s a reflection of inequality that affects society as a whole and the economy – in a big way. The responsibility lies with individual businesses to address this problem, and HR can play an important role in identifying and tackling the gender pay gap.

Being aware of the gender pay gap is the first step to tackling it. Understanding the often complex reasons as to why it exists will also help you to come up with ways to eradicate bias and discrimination and break the glass ceiling.

Here are just some of the ways HR can help enact change:

It’s hard to make changes unless you know what you are working with. Invest the time and energy into assessing the gender gap within an organisation, report on it, and review it regularly to keep those involved accountable.

Before making any assumptions, understand the key drivers and levers that are applicable to your organisation.

The information gathered can help you figure out where the weak points are within your business and how you can start to repair them.

This is likely to apply to all organisations. The gender pay gap isn’t just a women’s issue. It may be influenced by fathers who feel they can’t take time off to provide childcare. Normalising flex time for both partners might help to make a significant impact overall.

Every business should make their performance reviews, promotions, pay rises and rewards transparent, and make sure every employee has an equal chance to progress.

The same should apply to the recruitment and hiring processes. Using standardised, skill-based interview techniques can remove unconscious gender bias and reduce the opportunity for discrimination.

How do you determine a starting salary for a new hire?  Do you decide what the role is worth, or use what the successful applicant is currently earning, and use that as the basis of your offer?  It could be that they were under or over paid in their previous role, due to biases in that organisation.

Research has shown that men and women often view salary negotiations differently. Women may fail to negotiate due to fear of reprisal or lack of knowledge about how to approach the subject. Wage transparency will also help provide every employee with an idea of fair remuneration for their role.

Start from the Top

Create a medium term plan to redress the balance at the senior team. Focus on recruiting and promoting fairly into the top tiers of an organisation – this will role model the right balance for the entire organisation, provide more balance and diversity at the boardroom table, and statistically is one of the strongest levers to address the overall pay gap.

Gemma Bullivant can provide an independent perspective when looking at your company and through her HR consultancy and coaching, offer you a roadmap to understanding the factors that might be contributing to your gender pay gap, and where a gender pay gap exists, Gemma can analyse the root cause and suggest ways to actively address it.

Her proactive approach and years of expertise mean she can make impactful suggestions for your workplace to tackle the gender pay gap, so to see how she can help, please get in touch. Or, you can read more on the Gemma Bullivant blog.

Impact of Stress and Conflict on Leadership Approach

Top Company Benefits you Can Provide to Your Remote Workers

Gone are the days where gyms, free breakfasts, and ping pong tables are listed on…